Shimizu Completes Nirayama Reverberatory Furnaces and Will be Visible Soon

― Revitalized After Preservation and Repairing for the First Time in 32 Years!―

Shimizu Corporation（President: Kazuyuki Inoue）will soon complete to preserve and repair the Nirayama Reverberatory Furnaces, a UNESCO World Heritage site, which we were awarded the contract from Izunokuni City in Shizuoka Prefecture and began construction in October 2020. The scaffolding now covering the reverberatory furnaces is being dismantled, and the beautiful form of the twin furnaces are being revealed in their entirety.

The Nirayama Reverberatory Furnaces were completed in November 1857 as a foundry for casting Western-style cannon and operated to 1864. These are the only surviving reverberatory furnaces actually used to melt cast iron in the world. The current preservation and repairing are the first since it was designated as World Heritage site in July 2015, and has been 32 years since the previous major preservation in 1989.

In repairing bricks, mortar and plaster were used to repair the surface in 850 spots where the brick had minimal deterioration. Replacement bricks were attached to the surface in 240 spots showing advanced deterioration. For the 208 spots that had extreme deterioration, all or part of the bricks were replaced to new bricks. To paint the reinforcing steel frame, we completely stripped it first and confirmed that there was no rusting and deterioration of the steel. We then prepared the appropriate surface and coated a fluoropolymer. The field trial of plastering was also performed on parts of the reverberatory furnace bodies.

The main progressive of construction thus far were scaffolding in October 2020, inspecting brick deterioration in November-December 2020, producing bricks for repair from December 2020 through March 2021, repairing bricks in April-May 2021, painting the steel frames in June-August 2021, and field trial of plastering in September 2021. We are currently in the dismantle scaffolding as the final stage.

Shimizu has involved in preservation and repairing on numerous cultural heritage sites in the past, including World Heritage sites such as the Hiroshima Atomic Bomb Dome, the National Museum of Western Art designed by Le Corbusier, The Shosoin Repository, Great Buddha Hall at Todaiji Temple, Yakushiji Temple East Pagoda, and the main hall of the Izumo Taisha Shrine, which is a national treasure. Participation in such construction is a social responsibility of major construction companies, and Shimizu will continue to utilize its accumulated expertise to contribute to the preservation and repairing of cultural heritage sites.

Overview of Preservation and Repairing on the Nirayama Reverberatory Furnaces 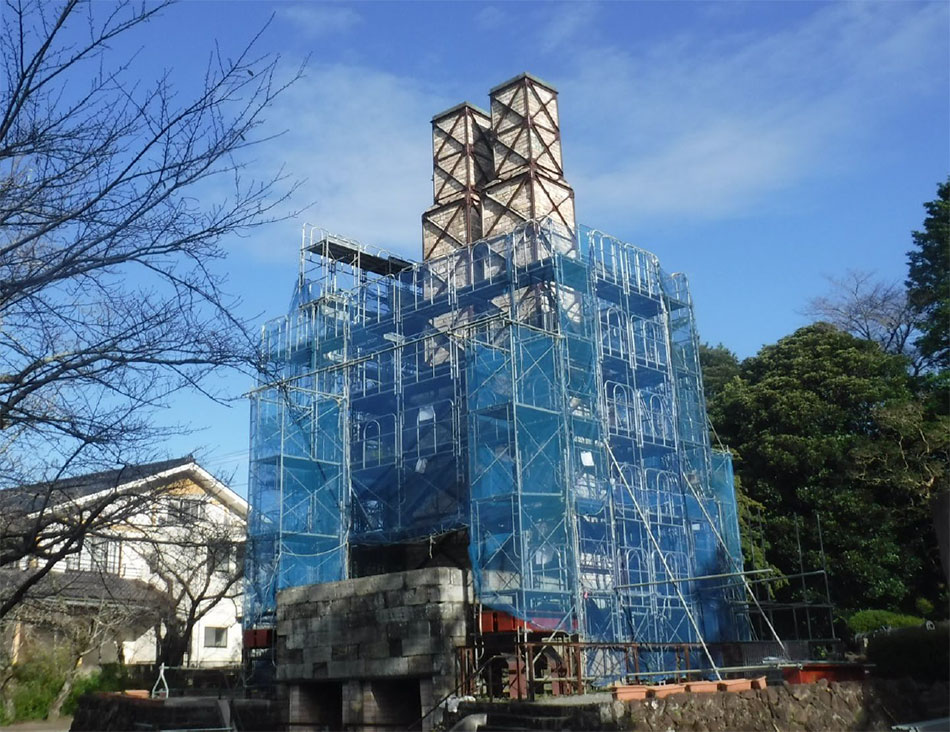 Reinforcing steel frame before and after preservation and repairing