Shimizu Corporation（President: Kazuyuki Inoue）will roll out the Shimz Smart Site next-generation production system in the new construction at A district of the Toranomon-Azabudai District Category 1 Urban Redevelopment Project（hereafter, “Toranomon-Azabudai Project”）under construction in Minato-ku, Tokyo. People and AI-equipped autonomous robots collaborate in performing construction work in the Shimz Smart Site. The Robo-Welder welding robots were introduced at first and have begun operating. Full-scale work will begin above ground floors any moment now once the massive steel columns have welded at the underground floors.

The autonomous robot, Robo-Welder, has six arms which move like human arms. It uses these to freely manipulate the shape-recognition laser sensors and torches at the tip of each arm to weld as it confirms the shape of each groove to be welded. The point of the work is to close the gaps in the welding groove using welding wire of approximately 1.2 mm in diameter fed from the torch in a manner like winding fine thread without any gaps. A simulator jointly developed with Osaka University is responsible for this level of control.

The planks of the steel columns welded by Robo-Welder at the underground floors are 100 mm thick, achieving a welding record as the thickest planks welded by a construction robot in Japan. The labor-savings achieved have also been confirmed, enabling the work that takes even master welders eight Man-Days per column to complete, to be performed in 5 Man-Days. Fourteen welding robots will be used in the welding work soon to be performed on the above ground floors. The plan is to use these robots in place of humans to weld approximately 15％ of the total weld length of around 1,800 km in A district. This will achieve a labor savings equivalent to around 500 workers in welding work up to the topping out and will greatly reduce the workload of welders during the hot and humid summer.

The second robots introduction is the Robo-Carrier automated conveyor robot, scheduled to begin operation from this summer. A robot stationed on the ground floor will pick up palletized materials and load them onto a freight elevator. A robot stationed on the floor where construction work is being performed will pick up the pallets from the elevator and automatically transport them to the designated location. A total of five Robo-Carriers will work in tandem to transport approximately 40,000 pallets. The third robots introduction is the four-legged patrol robots, scheduled to early next year. These robots move freely around the job site and use their installed video equipment to confirm the degree of completion and send the imaging data on completion to the office. This will site managers to understand what is going on at the job site while remaining in the office. 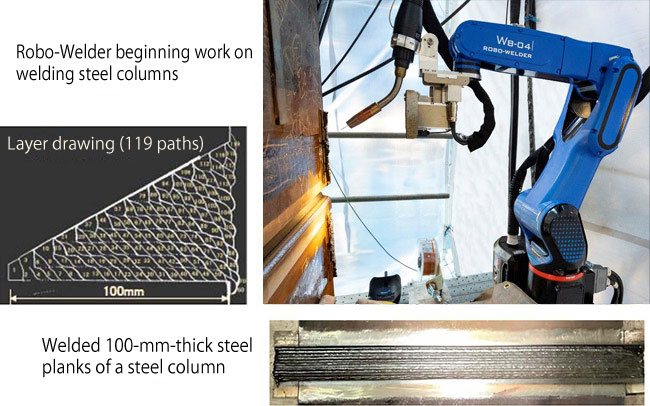 Since beginning construction at the A district job site in August 2019, we have excavated roughly 250,000 m3 for the underground placed roughly 32,000 m3 concrete at 38 m underground, and built a massive 80 x 80 m foundation（mat slab）that is 5 m thick. In October 2020, we then began steel frame erection. The quantity of steel frame used in A district will reach 130,000 tons. Full-scale erection of the steel frame for the above- ground floors will begin next.