Shimizu Corporation （President: Kazuyuki Inoue; “Shimizu”） has formed joint ventures and was awarded contracts in a row for large-scale infrastructure projects in the Philippines valued at over 100 billion yen. One of the projects was ordered by the Philippines Department of Transportation and involves the first and second construction section of the Metro Manila Subway that will partially operate prior to other sections. This is the country’s first subway system. The two contracts are for roughly 67 billion yen and 37 billion yen （tax excluded for both）. The other project is the Davao City Bypass Construction Project of the South-Central section, which Shimizu was awarded from the Department of Public Works and Highways. The project is valued at roughly 27 billion yen （tax excluded）. Other members of the joint venture for the former project are Fujita Corporation, Takenaka Civil Engineering & Construction Co., Ltd., and EEI Corporation, a local company in the Philippines. Those for the latter project are Ulticon Builders, Inc. and Takenaka Civil Engineering & Construction Co., Ltd.

The Philippines is geographically closest to Japan out of all Southeast Asian countries and sustainable development of the Philippines is seen as essential to the stable development of Japan and the Southeast Asian region. Japan has become the largest ODA donor country for the Philippines, based on Japanese government’s policy to strengthen relations between Japan and the Philippines in such areas as economic relations, human resource exchanges by utilizing ODA effectively. When Japanese Prime Minister Abe visited the Philippines in January 2017, he declared that Japan would provide one trillion yen in combined public/private aid to the Philippines over five years. These contracts awarded to the Shimizu-led Joint Ventures are all funded under the STEP （Special Terms for Economic Partnership） loan scheme, based on Prime Minister Abe’s said declaration.

The Metro Manila Subway Project will provide a total 32.4km of subway lines including 15 stations and one train depot, that connects Mindanao Avenue in the northern Metro Manila and Western Bicutan in southern Manila where the Ninoy Aquino International Airport is located, in order to ease severe traffic congestion.

The Shimizu-led joint venture will build a 6.9 km section of the Project which will be partially operable prior to other sections. It includes three stations （Tandang Sora Station, Quirino Highway Station, and North Avenue Station）, one train depot and six underground running tunnels connecting the stations and depot （3 southbound and 3 northbound with a total length of 9.3km） bored using six tunnel boring machines （TBM）. In November 2019, the first awarded contract includes construction of Tandang Sora Station and the depot and procurement of TBM and cut-and-cover tunnel works. Its contract period is 67months. The second awarded contract this time include major structure works for Quirino Highway Station and North Avenue Station, and procurement for the TBM tunnel segments. Its contract period is 49 months. TBM works and mechanical & electrical works for the two stations will be awarded as the third contract.

The Davao City Bypass Construction Project is to construct a 30km bypass road which connects Sirawan in the south to Indangan in the central part of the Davao City, for the purpose of alleviating traffic congestion and economic and social development of the Mindanao Island. The contract package awarded is the 10.7km-long section which comprises the central section of the bypass. This section includes two 2.3km-long tunnels （8m high, 10m wide, 80 m2 excavated section respectively）, 5 bridges totaling 900m （in three locations）, and a 7.9km-long 2 x 2 lane road （6.7m wide each） constructed by cutting and filling. Among JV members, Shimizu and Takenaka Civil Engineering & Construction will be responsible for the tunnel section, and the local partner will be responsible for earthwork and bridge construction. The contract period is 37 months.

Shimizu will continue to take on the challenge of large-scale infrastructure and building construction projects that require sophisticated technical expertise in fast-growing Asian countries and other regions. We aim to achieve 75:25 sales ratio of domestic to overseas business in 2030, as one of the goals set out in the 10-year plan of the Shimizu Group. 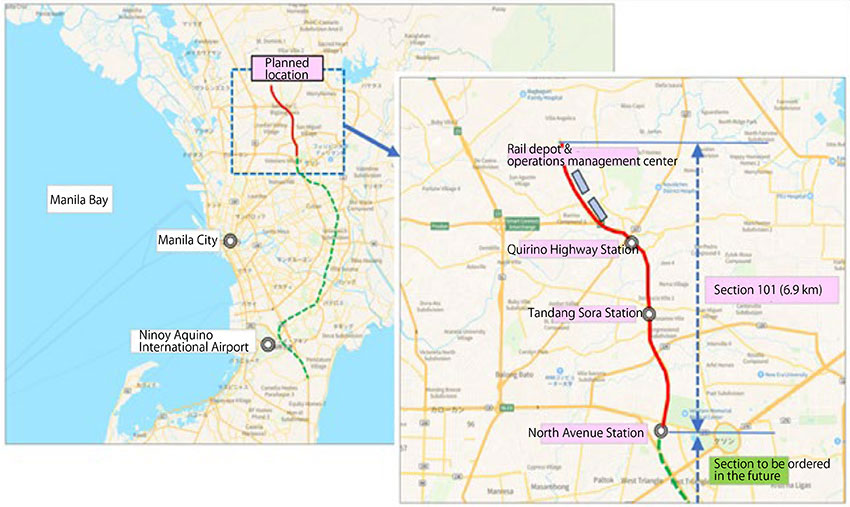 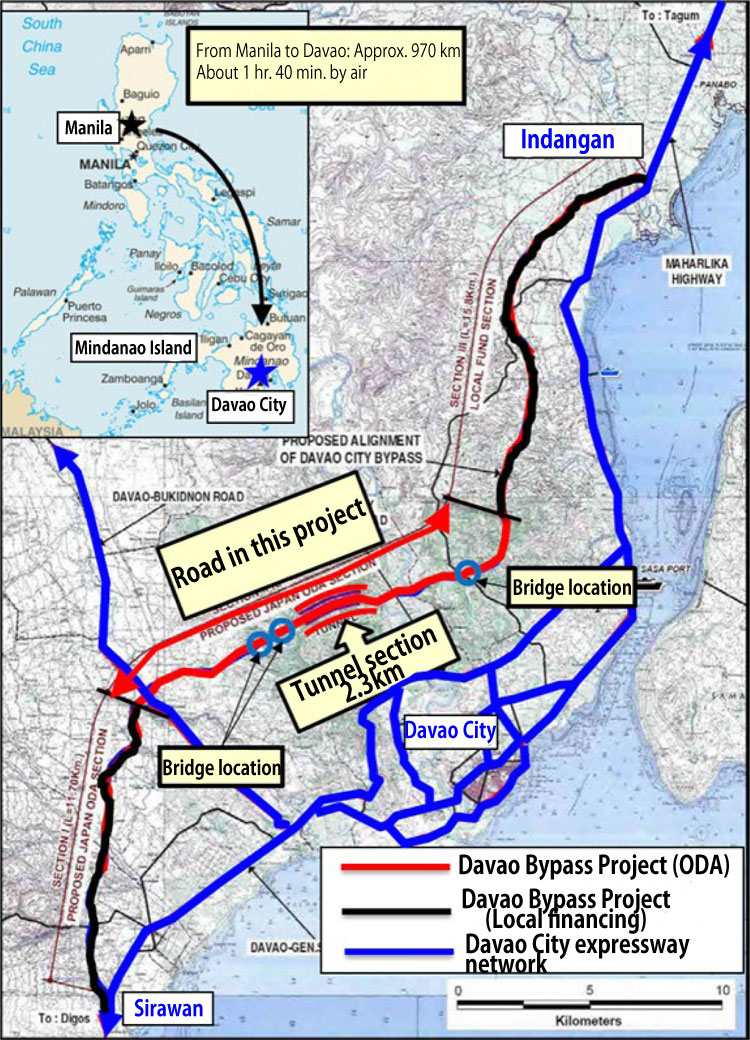