Shimizu Corporation, one of Japan’s top contractors, has shifted trials into full gear for autonomously controlled construction robots with the latest technology. The trials are run inside the Robot Laboratory at Shimizu's Institute of Technology in Etchujima Tokyo. The robots, developed by Shimizu, play various roles, such as conveying materials horizontally, welding steel columns or installing ceiling boards. These robots will be deployed to real high-rise building site in Osaka this fall. In the next fiscal year, the robots will work at several large construction sites in Tokyo.

We are concerned over a large exodus of skilled workers. A pressing issue for the construction industry is how to find labor while raising productivity. Shimizu believes that the key to raising productivity is better working conditions, higher wages and more off-days. At the beginning of 2016, a year the Ministry of Land, Infrastructure, Transport and Tourism designated the initial year of a revolution in productivity, we commenced development of the Shimz Smart Site, a next-generation production system in which robots and humans will collaborate to move construction projects forward. After a year and a half investing over 1 billion yen on intensive teamwork with universities and partners from other industries, we have completed the basic development and are ready for the next phase.

The robots undergoing autonomous control testing at the robot laboratory include: the Robo-Carrier, which conveys materials horizontally; the Robo-Welder, a robot that welds steel columns; and the Robo-Buddy, a multipurpose robot that handles construction work for ceilings and floors. Each one is a primary structural element of the Shimz Smart Site. An operator uses a tablet to send instructions that the robots carry out autonomously. At the laboratory, we are verifying the robots' ability to autonomously respond to varying patterns of work instructions, and adjusting the programming governing their operation accordingly.

The Robo-Carrier links with a temporary elevator to transport the supplies to the designated spot entirely unmanned when the operator selects materials to convey and enters their destination in a tablet. On the way, the robot recognizes obstacles and reroutes on its own to avoid them. At the same time, a collision prevention feature will halt the robot if a person comes near. To maintain an awareness of its position, the Robo-Carrier uses lasers to obtain real-time spatial data which it compares with other spatial data acquired from BIM. At the lab, the robot lifts a pallet on which plaster boards with a combined weight of around one ton are placed, and then carries them inside a temporary elevator. We are repeatedly checking how the robot sets down each pallet, then lifts them again in the elevator to convey them to a designated location.

The Robo-Welder has a robotic arm that uses laser shape measurement to determine the contours of a groove, or channel, on a steel column to be welded. The robot determines how to perform the job, such as the steps for cleanly placing the welding material in the channel. The robotic arm, with freedom of movement along six axes, performs the welding. Usually two Robo-Welders work together on one column. To verify that the Robo-Welder can handle the channels in columns to be used in the construction of a high-rise building in Osaka, we have been testing the robot's functions by altering the shape of the welding channels.

The Robo-Buddy has full control over two robotic arms with freedom of movement along six axes. After the sensors recognize the position of the ceiling grid frame material to insert ceiling suspension bolts, one arm lifts up a ceiling board to the correct position, while the other arm screws the board to the base material. At the laboratory, we are checking the Robo-Buddy's ability to install boards at a high-rise building in Osaka, as well as performance under varying construction conditions.

After the construction work on the foundation is completed at a site, an all-weather cover is installed to provide a lightweight shelter for the building against all kinds of weather. A new Exter crane, which is located beneath the cover, then lowers the columns and beams of the steel frame into position sequentially and Robo-Welder welds the columns to complete the framework. Robo-Buddy executes the final stage of finishing the floors and ceilings from the lower floors upward. After Robo-Carrier and other horizontal and vertical conveyor robots transport the materials that have been delivered to the construction site to their temporary staging areas at night, they then transport them to the location where a Robo-Buddy performs the work. 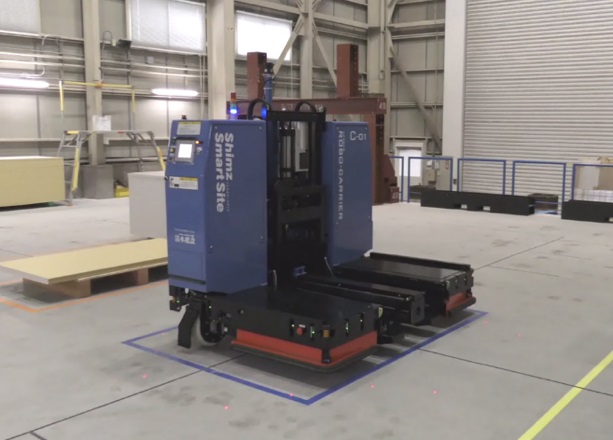 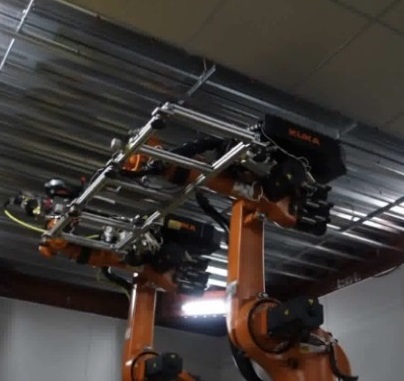 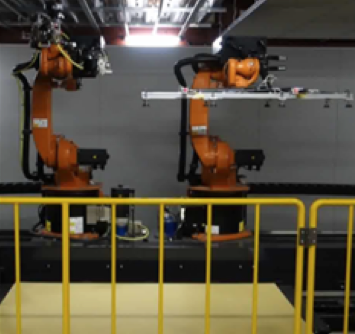 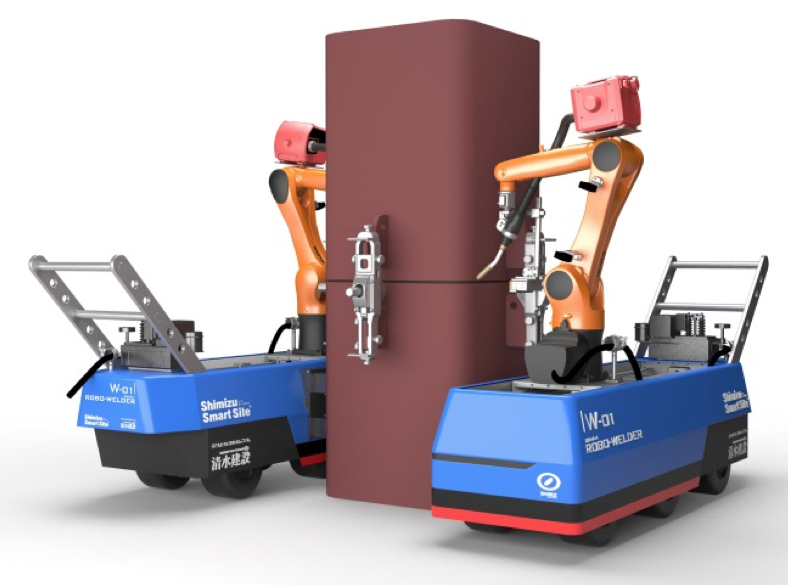