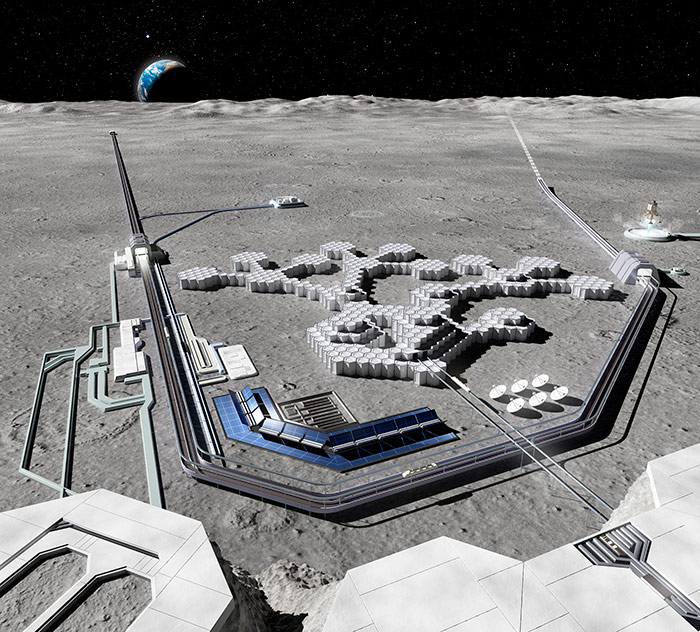 Base for Space Development Plans: Plans for Base that Utilizes the Moon’s Resources

A lunar base is viewed as one important part of the infrastructure for future space development plans.
Much of the construction technology developed on earth can conceivably be applied to base construction.
Shimizu is intent on employing the comprehensive technical capabilities it has accumulated over many years on the frontier of the moon and is actively pursuing research from various perspectives, including the structure, materials, construction technology, facility layout plan, living environment, etc.

Building a Lunar Base

Research on Structure and Materials

It is conceivable that, in the near future, structures will be built on the surface of the moon for various activities such as scientific and astronomical observation, various kinds of experiences, utilization of the moon’s resources, and tourism.
Inflatable and module-type structures that are relatively easy to assemble will initially be used, and there will subsequently be a gradual transition to structures that make use of the moon’s resources. This is because many construction materials are bulky and heavy, and it would not be very realistic to transport them from earth to the moon.
At Shimizu, we are conducting research on concrete and various other kinds of materials and structures that could be used in lunar base structure.

It is important to reduce the amount of work done by people as much as possible for construction work performed in the harsh lunar environment.
It will also be necessary to transport many kinds of equipment for the base, perform installation work, and perform civil engineering work to excavate the surface of the moon when expanding the base.
At Shimizu, we are researching and testing the construction machinery that would be used in that work for the required functions, performance, and the amount of energy required.

The design of the lunar base will need to be one that can be expanded gradually. The design will need to be worked out to provide the various functions that will be required at each stage.
Shimizu is involved in research on various approaches to base station planning to successfully create a facility layout that prioritizes safety and efficiency.