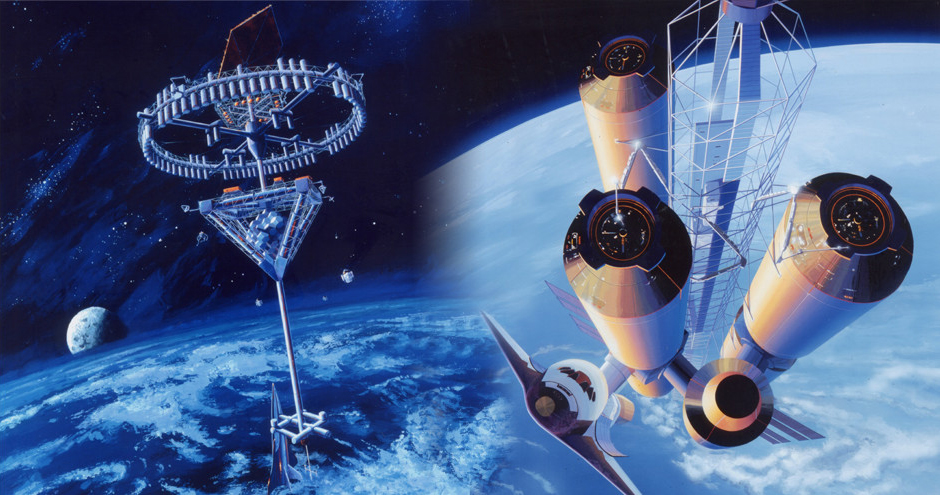 Since ancient times, people have always dreamed of going to space.
Only astronauts have been able to go until now, but progress has been made on efforts to enable even private citizens to experience space, and space travel is finally about to become an industry.
Shimizu foresaw the era of space travel early on, and has proposed a space hotel concept.

The space hotel is a large space structure that is 240 meters long. It consists of four sections: the energy supply, a guest room module, a public area, and a platform. The space hotel would float in a low earth orbit and would allow people who have not received any training to enjoy space travel.
The greatest objective of space travel is to see the earth. Travelers would be able to view the glowing globe of earth in the clear blue, the thin veil of the atmosphere, the beautiful clouds, and the dawn of sunrise on earth. They would also spend their time stargazing, playing sports and eating in zero-gravity space, and communicating with the earth.

The energy used in the space hotel would be generated from expandable solar panels and batteries.

A module with 104 individual rooms, including 64 guest rooms, would be arranged on a ring that is 140 meters in diameter. The ring would generate an artificial gravity field of 0.7 G by rotating around three times per minute, so people could relax almost in the same manner as on earth.

The public area would be assembled into a complex structure in the form of a truncated octahedron. It would have a great room consisting of a lobby, restaurant, entertainment room, and other spaces where people could enjoy a dining experience, sports, and a variety of amusements under low-gravity conditions.

Transport craft carrying space travel passengers and goods would arrive and depart from the platform.