150 Years Since the Beginning of the Meiji Period 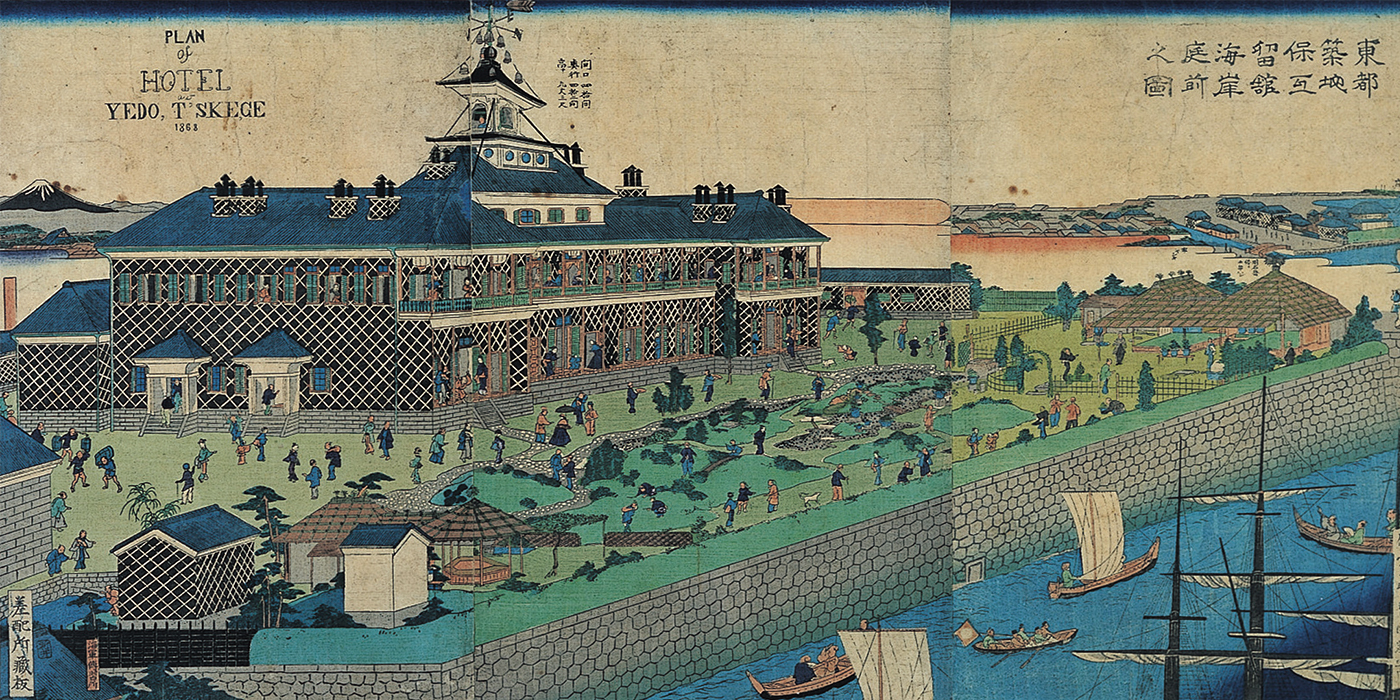 This year, 2018, marks 150 years since the beginning of the Meiji Period in 1868.
The Meiji period was an era of rapid modernization during which technology and knowledge was absorbed from other countries with the opening of Japan to the world. Western architectural technologies and styles brought in from Europe also precipitated major changes in Japanese architecture during this period.

Kisuke Shimizu II, the second owner of the company, sensed the changing times, foresaw that Western architecture would become mainstream in the future, and worked to acquire Western technology at the open port of Yokohama.
He then developed an eclectic quasi-Western style of architecture that blended Western and Japanese architectural styles, based on the traditional Japanese construction techniques, and completed three buildings that presaged the modern architecture of Japan.
Those three buildings were the Tsukiji Hotel, Daiichi Kokuritsu Ginko (Mitsuigumi House), and Kawase Bank Mitsuigumi.

September 1868 marked the change to the Meiji era from Edo era. It was during this year, the first year of the Meiji, that the Tsukiji Hotel, Japan’s first fully Western-style hotel, was built in the Tsukiji Teppozu area of Edo, in what is now Tsukiji Chuo-ku, Tokyo. The Edo Shogunate planned this hotel as lodging facility to be used exclusively by foreigners.
The American architect, Richard P. Bridgens, drew up the basic design and Kisuke Shimizu II was charged with the working design and construction of the building. The building was an eclectic architectural style that combined Japanese and Western elements. The exterior made use of Japanese style architectural elements such as namako-style walls* commonly used for the walls surrounding storehouses and samurai residences. This was combined with elements of Western style architecture such as the chimney and weather vane on the roof and the veranda stretching around the building.

※namako-style walls: A construction method that involves covering the wall with black square tiles and joining the tiles with raised, rounded white plaster. That resembles the patterning on a sea cucumber (namako).

Each of the more than 100 guestrooms was equipped with a fireplace and flushable toilet. The hotel was praised by the British people who stayed there as being comparable to the finest hotels in Europe.

The Tsukiji Hotel was not just a hotel. It had a stop for the stagecoach to Yokohama and a private post office at its front entrance, and served important roles as a transportation hub, communication post and other functions of a trading post.

Kisuke Shimizu II used the experience he had gained from the Tsukiji Hotel in his next project, Daiichi Kokuritsu Ginko, which was Japan’s first bank.
The bank was built in Kabutocho, Tokyo (now Nihonbashi Kabutocho in Chuo-ku, Tokyo) in 1872. It was originally planned as a bank for the Mitsuigumi, but was transferred to the newly established Daiichi Kokuritsu Ginko upon enactment of the National Bank Ordinance.

Mitsuigumi, which sold the building to Daiichi Kokuritsu Ginko, built a new bank in Surugacho, Tokyo (in what is now Nihonbashi Muromachi, Tokyo). That building was Kawase Bank Mitsuigumi. Kisuke Shimizu II was the contractor for both the design and construction of this bank, which was completed in 1874.

It was a wooden three-story building with more Western elements than the previous two buildings, but it had a bronze shachihoko (mythical fish with tiger like head) with a characteristic Japanese design on the peak of the roof in the most conspicuous place. Traditional Japanese woodworking techniques were used to build the arch-shaped windows and doorways that graced the building.

Acanthus flowers were carved on the heads of the round columns along the veranda.
Shimizu preserved this capital as a cultural treasure, and it was designated as registered tangible cultural property of Chuo-ku in 2013.

The three quasi-Western style buildings built by Kisuke Shimizu II immediately became new famous sites in Tokyo and were depicted in many color woodblock prints.
The color woodblock prints could easily be carried home as souvenirs, and became the teaching materials on quasi-Western architecture for the master carpenters and workers at construction sites. Quasi-Western style buildings were subsequently built throughout Japan by the middle of the Meiji period.

The originality, ingenuity, and technical skills of Kisuke Shimizu II gave birth to Quasi-Western style architecture. This was the architecture of the enlightenment period, and the beginning of the history of modern Japanese architecture.
“We can take on anything with spirit of innovation.“ This is the source of monozukuri (craftsmanship) at Shimizu, which has endured unchanged through the generations.