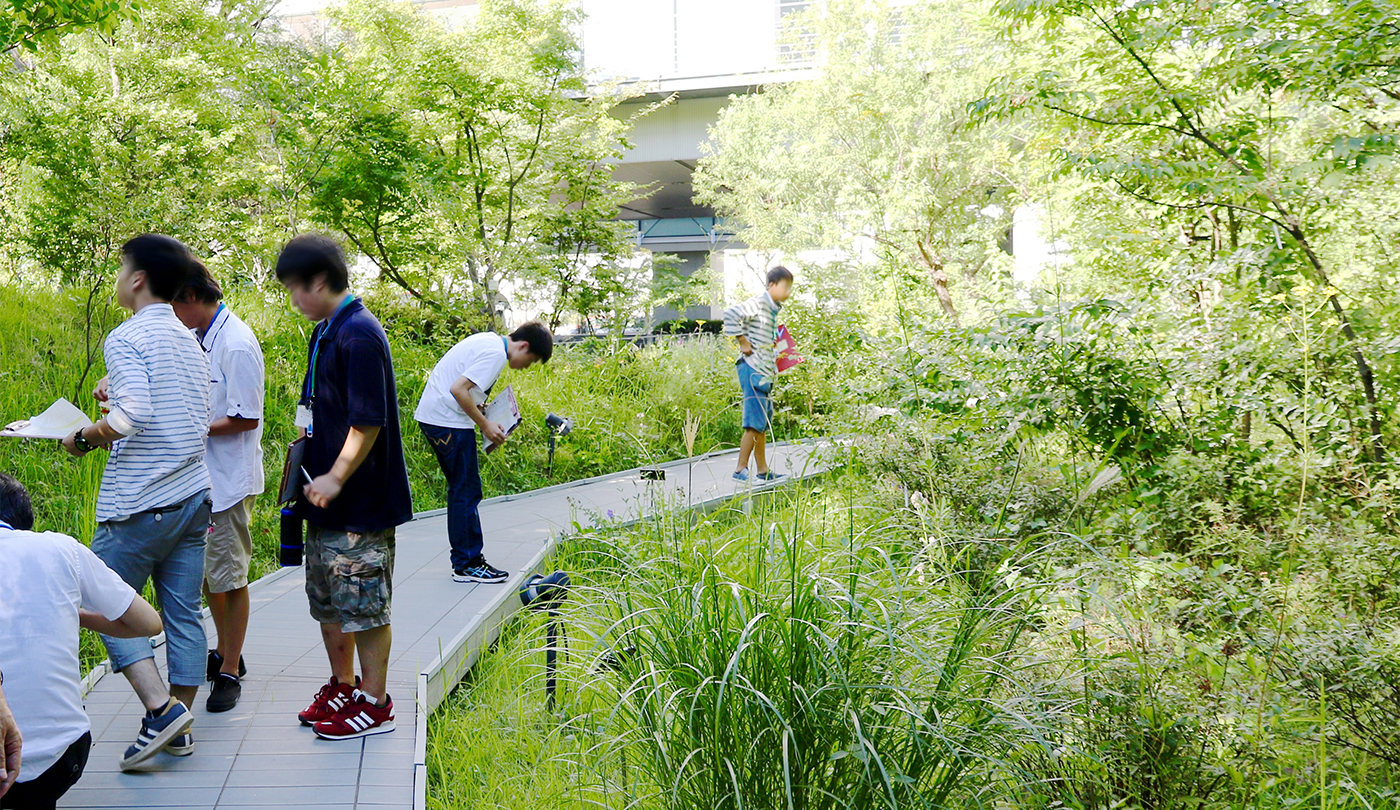 From the Institute of TechnologySaisei-no-Mori Urban Biotope Turns 12September 21, 2018

Twelve years have passed since the Saisei-no-Mori urban biotope was created at the Institute of Technology (Koto-ku, Tokyo). We have monitored the wildlife and plant environment for over 10 years and this has drawn interest as a rare and valuable initiative in data collection.
The biotope also serves as a venue for educating people about the environment and roughly 3,000 to 4,000 people a year visit it through the Shimizu Open Academy.

Saisei-no-Mori was built in 2006 to verify the potential for increasing biodiversity in urban areas. It covers 1,940 m2 and creates a diverse environment with zones built for different types of vegetation, including a waterside zone equipped with a pond and running stream, a wetland zone, a deciduous forest, and an evergreen forest.

It is currently managed by Yutaka Hayashi, the Chief Researcher, and researchers Takamasa Hirano and Yosuke Watanabe at the Institute of Technology. They perform surveys and research on biotopes.

Yutaka Hayashi made the following comment on the forests he has worked with since Saisei-no-Mori was built, “If we just planted plants and built a pond, the ecosystem would be different from that of the surrounding areas. We therefore first surveyed the surrounding environment, selected the wildlife, and incorporated the necessary environments for the wildlife into the biotope.”

Two hundred plant species were planted when the biotope was first established. All species used were from the surrounding environment in the Kanto area to prevent genetic disruption. Soil from nearby fields in the Kanto area was used for the topsoil. The fish released in the pond were also taken from the rivers and streams in the Edogawa watershed. The minami medaka (Oryzias latipes), an endangered species, was among these and we explored the possibility of preserving this species in the biotope.

Although we make sure avoid human intervention as much as possible in order to study the changes that occur after the biotope was created, a certain degree of maintenance is necessary to thin overgrown species and eliminate foreign species.
Hayashi remarked, “If a professional landscaper is not first told which vegetation to remove, workers could end up removing all of it. The initial thinning was therefore performed only by researchers and they created a list of which vegetation to remove and which to leave.”

Results from Monitoring the Biotope Over 10 Years

Biotopes have been created in various locations in recent years, but few are being monitored long-term.
Yosuke Watanabe, who performs research on evaluating and planning green spaces, commented, “The ecosystem of the biotope changes year after year, so continuing to monitor the biotope and making adaptations to the biotope over time will help identify problems and enable improvements and an increase in biodiversity.”
The monitoring performed during the 10th year after construction produced the following results.

Main Plants and Wildlife We Were Able to Monitor

Takamasa Hirano, who joined Shimizu three years ago, summarized the results in this way. “We can state that the growth of the trees provided a better environment and led to an increase in biodiversity. However, a problem with dense growth also emerged, so we have been thinning to a certain extent and watching how things develop.”

The Future of Urban Biotopes

One keyword in thinking about biotopes in the future is “network.” This has been a trend in recent years when considering how to create a friendly environment for biodiversity and it is also spreading among academic institutions, local communities, governments, and private companies.
If we can build biotopes in various locations such as on rooftops, in school gardens, and other locations, it will form a network, even if they are small in size. We can expect this to create an environment in which many species of wildlife can flourish, from the suburbs to urban areas.

Another keyword is “green infrastructure.” As interest in SDGs (Sustainable Development Goals) and ESG (Environmental, Social, and Governance) elements grows, the role played by urban biotopes is growing increasingly larger. Such efforts are aimed at solving the various challenges that communities face, such as creating a healthier water cycle, improving the hot summer environment, and disaster prevention and mitigation, as well as providing for health and welfare and environmental education.

All three men strongly emphasized that they would like to communicate what is needed in an urban environment and what advantages they provide to customers and communities, based on the data.

Shimizu will continue to improve and verify technologies for building biotopes in the future, not just to increase biodiversity, but also to enable the whole range of benefits to be manifested collectively