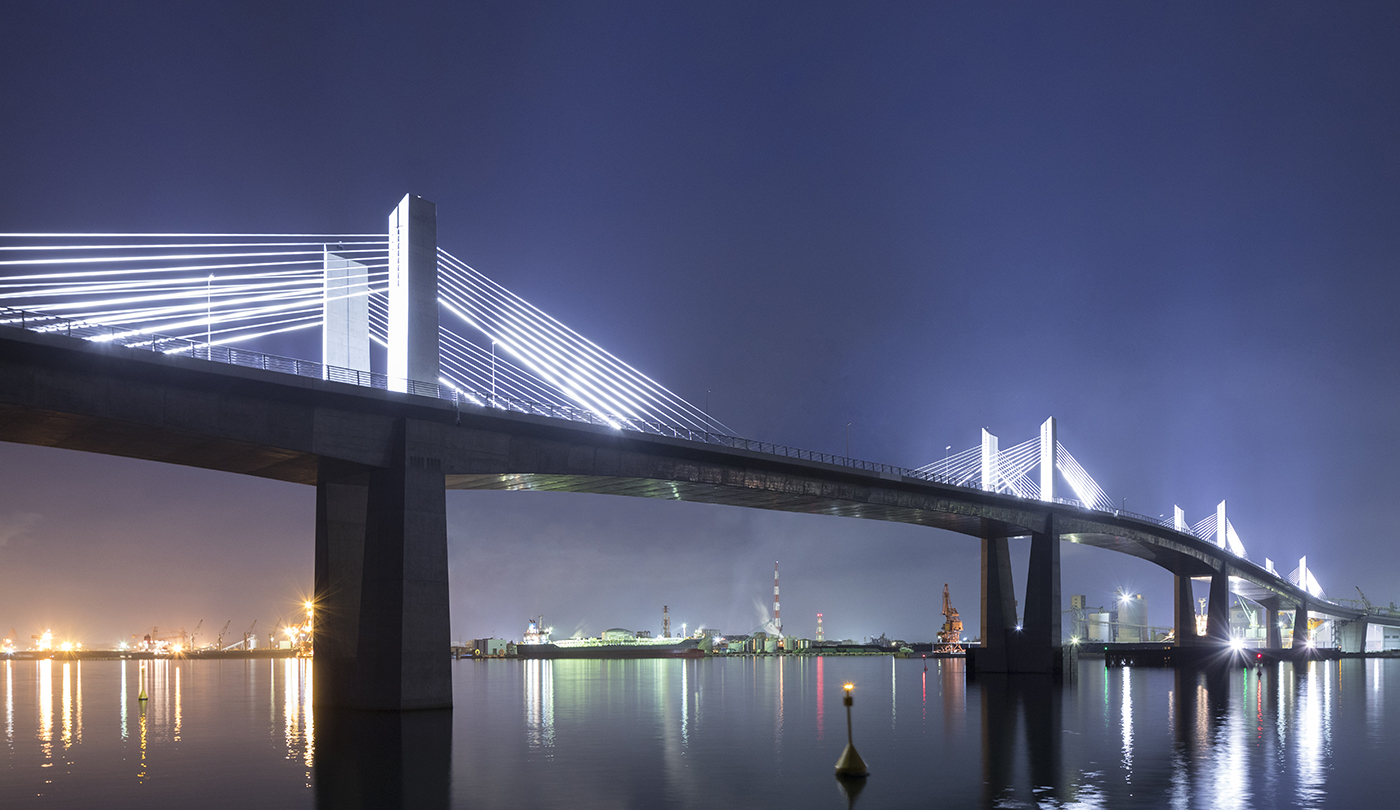 The Onahama Marine Bridge, a prestressed concrete (PC) bridge built by Shimizu Corporation, received the Tanaka Award from the Japan Society of Civil Engineers in June 2018.
This award is the most prestigious award in bridge sector. It is named after the late Dr. Yutaka Tanaka, who is called the father of the bridge and structural engineering in Japan.
Here, we introduce the story of how Shimizu, a latecomer to the PC bridge sector, came to accumulate a track record and earn numerous Tanaka awards from the Japan Society of Civil Engineers.

A PC bridge is a bridge that uses the prestressed concrete as the main structure. Concrete is prestressed by tensioning high-strength steel tendons, producing compression in the concrete volume, prior to supporting any load. It is capable of withstanding higher loads than regular reinforced concrete, making longer spans (distance between piers) possible. Today, many of the new concrete bridges in Japan are PC bridges.

*1P&Z construction method: This method enables construction of the superstructure without temporary piers, so it is suitable for bridges that span large rivers and valleys. The bridge body is divided into segments built by a formwork suspended from the movable girder. A block of about 10m length can be built at a time, larger blocks comparing it to the “form traveller” of the cantilever construction method, enabling rapid construction. (Developed by Polensky & Zöellner of West Germany)

*2Cantilever construction method using form traveller: The blocks are built by form travellers suspended from each end of the bridge body. A block of about 2 to 5m in length can be produced at a time.

The starting point of PC bridges by Shimizu was the Tsukiyono Bridge in Gunma Prefecture, which spans the main branch of the Tonegawa River. The P&Z construction method was first used in Japan to build the superstructure of the Tsukiyono Bridge, which was completed in 1982. The bridge, which opened up a new area in bridge construction technology, was awarded the Tanaka Award by the Japan Society of Civil Engineers in 1982.

Shimizu subsequently expanded its track record in PC bridge construction, however, it is said that it is not the number, but the bridge span length that really reveals the technical capabilities in bridge construction. Shimizu launched an internal development project in 1985 and began working on developing technology for a PC cable-stayed bridge*3 with a construction style suitable for long spans.

Shimizu’s wide effort led to a contract for the Notojima Nodo Bridge, the hoped-for cable-stay bridge with a long span of 230m, in 1995; followed by the Tenkenji Bridge, with a span of 219m in 1996.

Shimizu took on the challenge of expanding its horizons to overseas projects as well. It used a large precast segment construction method*4 to build the Malaysia―Singapore Second Link Bridge that spans the borders of the two countries. With 1.7km length, it was the longest bridge built by a Japanese company with this construction method at the time it was completed in 1997.

In 2006, Shimizu also completed the Bai Chay Bridge, which spans the picturesque Ha Long Bay, a UNESCO world heritage in Vietnam. The bridge has a maximum span of 435m. This was a major accomplishment in the area of long cable-stayed bridges. The 435m span is the longest in Southeast Asia among single-plane PC cable-stayed bridges*5.

The Yabegawa Bridge was completed in Japan in 2009. It is a PC cable-stayed bridge with three continuous spans and has the longest span in Japan with 261m.

The number of project biddings conducted under the “general evaluation system” has increased since the 1990’s. Shimizu has also worked actively to propose the technology that it possesses. For railway bridges, Shimizu proposed the P&Z construction method for the completion of the superstructure of the Narusegawa Bridge regardless the winter at construction; The Bridge was completed in 1999. The superstructure and substructure of the fin back bridge, known for its characteristic fin-like appearance, were completed in a total construction period of about two years.

Shimizu’s proposal in the design competition for the reconstruction of the Amarube Bridge, which has been certified as a modern civil engineering heritage, was selected and Shimizu received the contract in 2007. The design included the construction method.
The new Amarube Bridge is a PC extradosed bridge*6 with five continuous spans. The super structure was built using the cantilever construction method with form traveller. The section that connected with the existing tunnel on the Kyoto side was considered one of the most difficult constructions ever attempted in Japan. It involved rotating 5.2 degrees at 40m above the ground the bridge girder of 93m long, 4m wide and 3,820ton weight.

*6Extradosed bridge: Is a bridge type with a structure that combines the main characteristics of a prestressed box girder and a cable stayed bridge.

Amarube Bridge, Working on a Civil Engineering Heritage that Will Last 100 Years

In recent years, Shimizu has grown to the point where it can take pride in its track record and technology in Japan as well, having received numerous Tanaka Awards from the Japan Society of Civil Engineers, the foremost authority on bridge design and construction.

Shimizu will continue to hone its development of bridge technology in the future. We will strive to provide value that exceeds the expectations of our customers and society, and will contribute to establishment of social infrastructure.