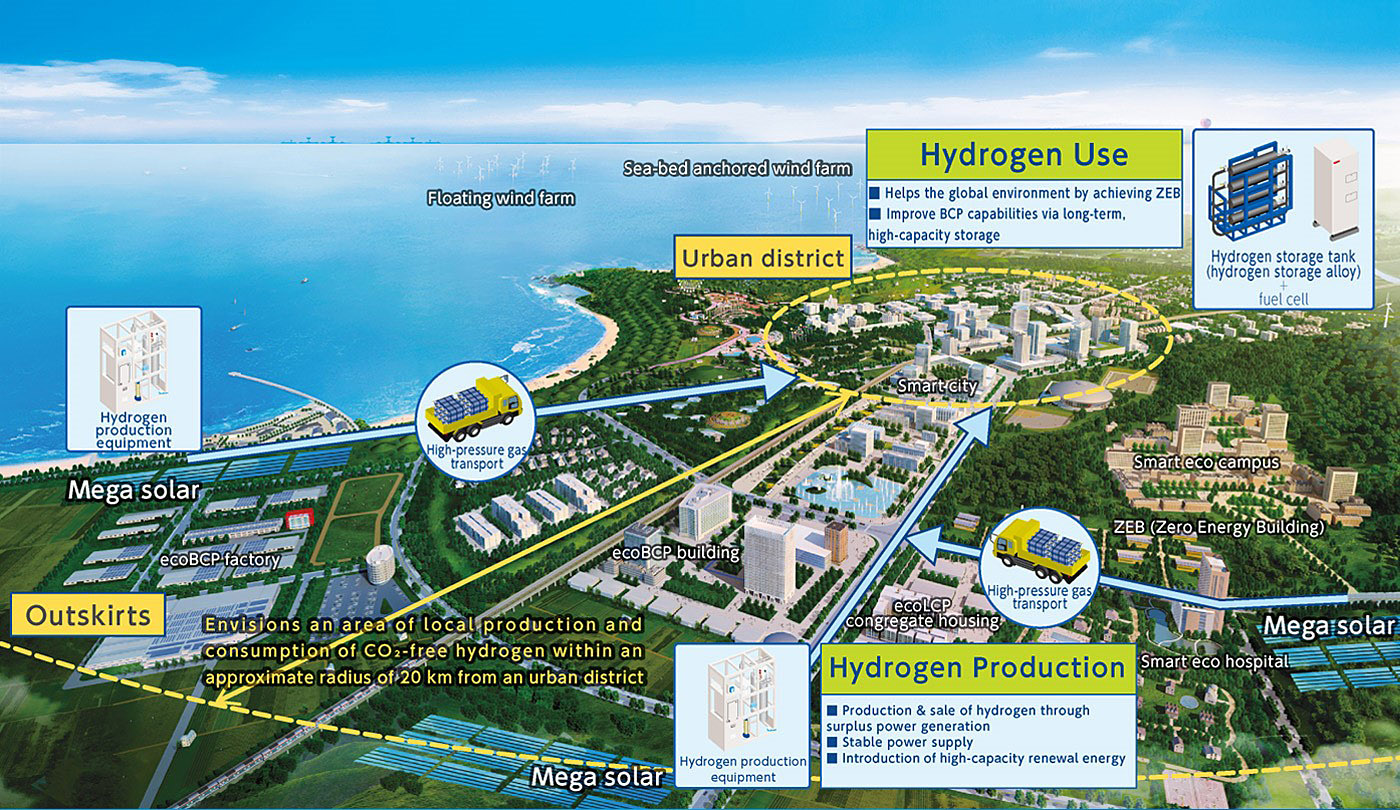 From the Institute of TechnologyA CO2-free future powered by hydrogen energyJune 15, 2018

Do you know where approximately 40% of the CO2 emissions in Japan come from?
They are actually related to construction. Close to 80% of construction-related emissions comes from energy consumed in operating buildings. In other words, the use of lighting, heating, ventilating, air conditioning, and elevators results in a massive amount of CO2 emissions.

Tsuyoshi Nozu of the Shimizu Institute of Technology came up with this idea one day when he was thinking about a mechanism for reducing CO2 emissions from buildings as much as possible. He thought, “I wonder if hydrogen energy could produce enough electricity to operate buildings.”

Hydrogen (H2) produces electricity and water (H2O) when subjected to a chemical reaction with oxygen (O2). The opposite basic principle of that reaction is that hydrogen can be produced through the breakdown of water into hydrogen and oxygen due to an electric current passed through the water. If solar power or some other form of renewable energy is used to generate the electricity for this, no CO2 will be emitted in the hydrogen production process.

The Hydrogen energy utilization system was built from the thought process of wondering if CO2-free hydrogen*1 could be used in building energy management in the same manner as gas or electricity.
To summarize this concept, hydrogen is generated by using surplus solar power (from water through electrolysis). The hydrogen is then stored in a metal hydride tank, and released as needed to generate a chemical reaction with oxygen in the air and produce electricity and heat.
Achieving this would make massive reduction of CO2 emissions from building operation possible.

The Hydrogen Technology Group in the Energy Technology Center at the Institute of Technology, which is headed by Dr. Nozu, worked on the preparations for experimental testing on the assumption of installing to a building with total floor space of around 1,000 m2.

How are large amounts of hydrogen stored?

The hydrogen storage method was the challenge confronted in designing a workable hydrogen energy utilization system. A large-capacity tank would be needed to store hydrogen in a gaseous state, and this naturally would increase the amount of storage space. Moreover, hydrogen also presents the risk of explosion, and this could lead to massive damage if hydrogen stored under high pressure should leaked inside a closed building and ignited.

Having succeeded in developing the ideal hydrogen storage alloy, Shimizu finally began experimental testing in June 2017. During the experiments which continued for about 10 months, we used Smart BEMS*2 to examine solar power generation and the building status based on actual data on the electricity and heat demand for the building to monitor and control the production, storage, and release of hydrogen. More specifically, the excess power generated during the spring and fall was converted into hydrogen and stored, then used for air conditioning and heating in the summer and winter, with the goal of securing efficient energy management technology.

*2Smart BEMS: An energy management system for buildings developed by Shimizu. This system enables comfortable and efficient energy savings through integrated optimal control of distributed power sources and the equipment in various buildings.

Fuel cells also generate heat when using hydrogen to generate electricity. We realized that this system is especially well-suited to buildings that require a large amount of hot water, such as hotels and hospitals.
In the performance testing of the hydrogen storage alloy, we repeatedly stored and released hydrogen through about 1,000 cycles. The hydrogen storage alloy only degraded by a few percent despite this. Dr. Nozu revealed his confidence in its durability with the comment, “it appears that it can operate with no problem for 10 years when used in a normal operating cycle.”

Achieving CO2-free power generation is a given; it is also promising for BCP

Dr. Nozu said that he would like to try it in an actual building in the future, and has his sight set on the next step in the process of commercialization.

Our problem with the amount of CO2 emissions could become a relic of the past in the near future, if we are able to achieve efficient energy management for entire cities by storing the power generated by mega solar farms built on the outskirts of cities and offshore wind farms.
The hydrogen energy utilization system, which is capable of high-capacity storage over long periods of time is also promising as a power source for BCP*3 use. This heightens the expectations for the hydrogen energy utilization system in making Smart Cities that are clean and sustainable a reality.

*3BCP: This refers to business continuity planning and involves planning, preparation, and ongoing maintenance to enable resumption of the most essential business activities in the shortest amount of time possible in the event that a disaster or accident interrupts normal business activities.