The above method offers two key advantages: First, its energy sources, geothermal and biomass, are both plentiful in Japan. Second, it enables low-cost, low-carbon generation. Carbon emissions produced during hydrogen generation are just a tenth of those produced in the generation of commercial（grey）hydrogen, while generation costs, at 24–38 JPY / m3（per 1 Nm3 H2), are just third of the costs of conventional methods for generating green hydrogen（such as by solar energy and water electrolysis).

Hydrogen is a clean fuel in that it produces no carbon emissions when consumed. As such, it can contribute significantly toward a decarbonized world. However, for hydrogen to fulfil this role, there must be a method for generating large volumes of green hydrogen at low cost. Hydrogen has been produced commercially for many years. However, the vast majority of commercial hydrogen is “grey” hydrogen—hydrogen generated from refining liquefied natural gas, which has a high carbon footprint. The alternative to grey hydrogen is “green” hydrogen, which generates hydrogen entirely from renewable sources, using solar energy and water electrolysis for example. However, green hydrogen still has a high carbon footprint. Moreover, it is very costly.

The above method addresses these issues by providing a low-cost alternative for green hydrogen generation. The demo facility will consist of a carbonization furnace fuelled by wood chips, a steam-reforming reactor for gasifying carbonaceous materials, and a hydrogen refinery. The generation process begins by steaming wood chips in the carbonization furnace to extract carbon from the biomass. The carbon is then injected into the reactor, where it comes into contact with steam and heat, produced by heating the furnace to over 800 ℃. The high temperature causes the carbon to react with the steam, forming syngas（also known as synthetic gas), which consists of hydrogen（H2), carbon monoxide（CO), and carbon dioxide（CO2), and steam（H2O). The syngas is then reheated to induce a chemical reaction that increases the H2 concentration. Finally, it is refined using a pressure swing adsorption（PSA）system and metallic membrane for hydrogen separation. The result is green hydrogen（with a purity of at least 99.999％）ready for use in fuel cells.

The hydrogen generation process is fuelled by a high-temperature（1,070 ℃）gas emitted from the carbonization furnace. This fuelling method significantly reduces the cost of hydrogen production in that it minimizes electricity consumption and because any excess exhaust can be sold as a heat source for water tanks used in geothermal batteries. The high-temperature gas is itself generated by the atmospheric combustion of by-products from the carbonization furnace, including fuel gas and tar.

Shimizu has received funding toward the construction of the plant from the Ministry of the Environment, under a ministry program titled Low Carbon Technology Research, Development and Demonstration Program. The plant will produce hydrogen at a rate of 50 Nm3 per hour. Construction will complete by the end of March next year. A trial will be then conducted over the April–June period, with a performance evaluation to follow in July. The trial will examine a range of wood chip feedstock, ensure that no CO2 is produced during the hydrogen generation process, and verify the cost of hydrogen generation. The results will be reported to the ministry in March 2023.

Shimizu hopes to build on the findings of the demo and construct other such demo plants. By 2025, the corporation aims to have built several hydrogen demo plants next to small or medium geothermal power stations in Oita, Kumamoto, Kagoshima, and elsewhere in Kyushu. Ultimately, Shimizu aims to build commercial plants that produce hydrogen at a rate of 250–1,000 Nm3（22.5–90 kg H2）per hour, use 2 tons of wood chip feedstock injected per hour, and use 0.65 tons of geothermal steam per hour. 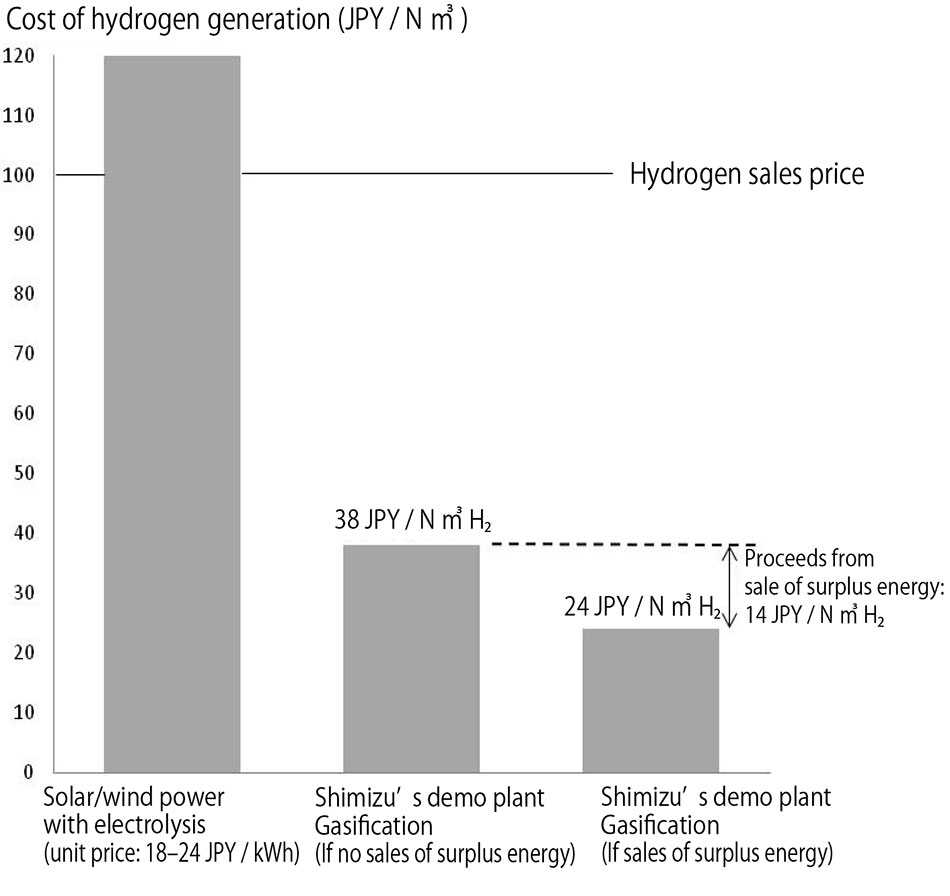 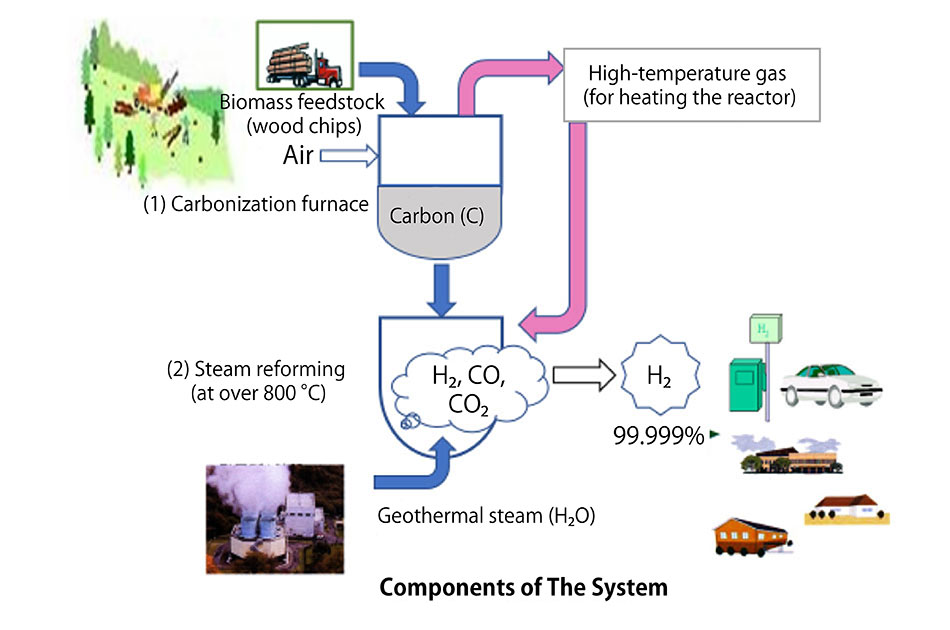 Overview of Shimizu’s Partners in The Demo